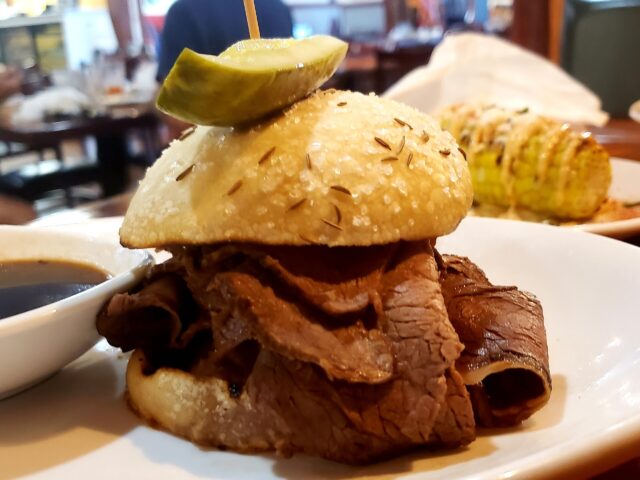 a restaurant that specializes in serving steaks.

Over the years I have heard many great things about Brasas Steakhouse that is located on Merritt Island. Finally, during a random visit during lunchtime in the area, I got a chance to check them out. They actually once were located in Historic Cocoa Village across the street from The Tulip. Several years ago they moved into a plaza about 3 miles away on Merritt Island.

In addition to hearing many great things from friends, colleagues and even restaurateurs Brasas ended up on my radar because I had recently seen that they were now serving beef on weck. A Beef on A Weck is slices of rare beef on a kummelweck roll, with horseradish spread on the top bun, the bottom of the roll is dipped in Au Jus and served with a side of Au Jus. A staple for Buffalo natives.

They serve a number of items for lunch, but in all honesty, I was so focused on getting the beef on a weck that I didn’t really acknowledge the rest of the menu. One thing that did stand out that while I was visiting, a couple across from me appeared to get the full rodizio which I believe is $24.99 a person and includes unlimited grilled meats in addition to salad and soup.

This curry soup was really delicious, a lighter curry broth that resembles what I would consider to be authentic Thai style. It had a little bit of sour flavor to it which I would assume was from lime in the dish. In my initial video comments, I didn’t really take into the fact the soup actually was perfectly seasoned with the sour flavor. Being as I recalled as I was devouring this bowl of soup is that even though it was a seafood soup the taste of seafood was far from overwhelming as I would expect. In retrospect, I would say that has to do witht the citrus flavor that I picked up on. The chunks of meat we’re thick, juicy cooked perfectly which is a hard task to accomplish in a soup in my experience. To keep the seafood from continuing to cook in the broth of soup is a hard task and this was accomplished well by the chef.

We also had a choice of a salad, not sure if we could switch between salad types for the unlimited but doubt that would have been possible to accomplish and not require being wheeled out of the restaurant.

What initially caught my eye in both the dish and the menu description was the fact that it included eggplant 🍆 😳 this was new to me in a pasta salad, I could be sheltered, but oh well I’m a huge fan of the purple ingredient so had to try it. Boy oh boy was I glad I did! Fresh chunks veggies in addition to the eggplant tomatoes, and chunks and of cheddar cheese. The vinegar typical in the pasta salad was light and provide the perfect amount of acidity as well as the depth of flavor leaving your palate salivating for more.

Now onto the main event

THE BEEF ON A WECK!

I don’t know exactly at what point into my social media food browsing this dish popped up in my timeline, but it has made a lasting impression.

A Beef On A Weck is a staple dish out of Buffalo New York. Similar to a French Dip, but takes it to a whole other level. The staple difference is not only that it is a sandwich from instead of a sub roll it’s that it comes on a specific type of roll. A kummol’Weck” roll hence the name Beef on a “weck”. Slices of rare beef, and a spread of fresh horseradish. The bottom half of the sandwich is dipped in the Au Ju before being plated and topped with the top of the bun and horseradish spread.

I was fortunate enough to have a chance to speak with the Chef/Owner when dining and he gave me an in-depth detail of the house-made kummelweck. The roll is known for its ability to absorb the juice from the Au Jus without getting soggy. Yup, you read that correctly! WITHOUT getting soggy.

In my best way of describing it texture-wise, it’s as if you are eating a sponge absorbed in meaty beef broth. But not soggy or soppy. The variations and pockets are big in the bread but doesn’t bog down. The outer crust of the bread is also sprinkled with kummelweck seed as well as kosher salt giving it a crisp flavor that you can’t get anywhere else.

This sandwich was near perfection, the beef was tender as can be, combined with the house-made roll and dipping it in the Au Ju and the little spice on the back end from the horseradish. Surprisingly the extra fatty pieces were melt in your mouth, on initial appearance it looked to be that it was going to be chewy and this was far from the truth. All around a great sandwich, in my opinion, the roll was a little salty so it was higher than I would have liked on the sodium content. Also being a huge fan of spice I believe next time I will ask for extra horseradish. Definitely worth ordering again and as I write this I am even craving it!

The lunch also comes with a hot side, and I chose the

Street Corn is basically grilled corn, with aioli sauce or lime mixed mayo, some spices, and usually parmesan cheese. I actually prefer the traditional kind that uses Cotija cheese although that increases the price as well so would not expect them to have that on an $11.95 Lunch special. This one used parmesan and despite that was still very tasty, a factor of being a Brazilian steak house and having an actual wood-fired grill gave the corn extra tasty flavor and depth.